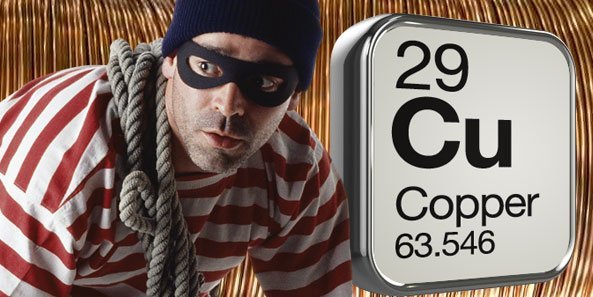 This information is from the article “Copper Theft”, by Kristin Gunderson Hunt in the March/April Journal of Property Management

Copper theft is epidemic across the nation, spurred by copper’s record high value and a vast pool of vacant properties that are easy targets for thieves. Often found in HVAC systems, plumbing, electrical wiring and fiber optics, copper is highly valued at scrap yards. Thieves steal the material and sell it for quick cash.

According to the May 2013 report from the National Insurance Crime Bureau, the number of insurance claims for the theft of copper, bronze, brass and aluminum increased 36 percent from 2009 to 2012. Of those claims, 96 percent were for copper alone.

The cost to real estate portfolios is not just the stolen copper itself, but the extensive property damage resulting from the theft, including expenses to repair collateral damage, such as water damage stemming from stolen copper pipes. Other increased expenditures include the cost to insure the damaged building, and to make sure its services comply with updated regulations, which might not have applied during initial construction or installation.

Real estate managers and owners should be well informed about their insurance policies. Carriers may have coverage exclusions if the property is vacant or a certain percentage vacant. Attempting to negotiate such clauses usually results in higher premiums or the need to add excess and surplus lines of coverage.

Ordinance of law exclusions may deny payment for the construction or repair of damaged buildings to conform to the latest building standards, only covering costs up to the standards the building formerly had to meet.

The problem is that copper theft is attractive to thieves because it’s easy to steal, difficult to get caught stealing, and the penalties are a mere slap on the wrist. This is exemplified by the lack of enacting State or Federal legislation as in the tabled bill the “Metal Theft Prevention Act of 2013” by the US Senate.

The critical and widespread epidemic of this crime is recognized by property managers, who in protecting their owner’s assets see the importance of implementing solutions for their owners.

Combating copper theft—which occurs at all property types, both vacant and occupied — involves everything from common-sense lighting solutions like increasing exterior and interior lighting and using timers, to installing the latest security gadgets such as cages or alarms on HVAC systems. Additional measures include wireless video surveillance, which can be triggered by motion and monitored off-site, and removing easy access to the units such as ladders to the roof or dumpsters to climb on.

The costs to replace and repair the theft and damage exceeded $190,000. Both insurance claims were denied due to vacancy clauses in the policy.