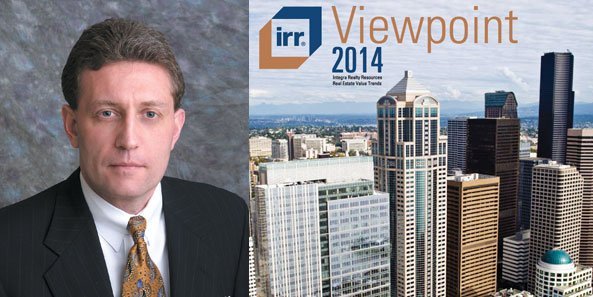 • Capitalization rates continue to compress nationally and now are approaching or exceeding the lows previously seen in 2006 and 2007.
• Overall transaction volumes are expected to increase over 2012, although year-end figures for 2013 are not yet available.
• Commercial Mortgage Backed Securities (CMBS) volume in 2013 will more than double 2012’s volume, but is still about one-third of its 2007 peak. Other sources of financing (government entities, life insurance companies and commercial banks) have picked up the slack. • General vacancy rates are dropping across most markets and property types.
• Capitalization rates dropped the most in the Western region (driven by the coastal markets). Capitalization rates in the Central region are the highest.
• Of the four stages of the real estate cycle as defined by IRR (recovery, expansion, hyper-supply and recession) multi-family had more markets in the hyper-supply category than any other sector. Multi-family assets were the first to recover and are viewed as having the most potential to see capitalization rates rise. Much of the financing for multi-family construction comes from government entities that are providing historically low interest rates and are driving much of the rise in values. It is hard to imagine these rates getting any lower.
• Retail transaction volumes in general were not as robust, and capitalization rates experienced less compression than other sectors.
• The industrial sector had the most markets in either the recovery or expansion mode and no markets in the survey were in the hyper-supply mode.
• Capitalization rates, in Class A industrial, contracted. It is interesting that of all the sectors, flex/industrial in the Midwest had the widest difference as compared to the same product type in the Western region of any product type in the survey. The industrial sector had the strongest underlying property fundamentals of any sector according to the survey.

• IRR survey participants were asked if they thought capitalization rates were more likely to increase or decrease 50 basis points in the next three years. The majority of market participants believed that capitalization rates were more likely to increase than decrease over this period.
• The factors most likely to affect investment property values over the next three years (either higher or lower) were: 1) the ability or inability to drive future property income growth, 2) supply (or lack thereof) of investment opportunities, and 3) future interest rate fluctuations.
• Respondents believe neighborhood retail, community retail and Class A industrial assets have the highest chance of experiencing price appreciation over the next three years.

• Activity and interest in commercial real estate investing in Omaha and the surrounding areas has significantly increased since 2009 and has accelerated in the past 12 months.
• We are finally starting to see interest increase in the Omaha area from outside investors after a long quiet period (with the exception of Multi-Family, which has consistently had interest from outside investors).
• Underwriting is much more realistic. Investors are using market rents and realistic leasing assumptions. They are not relying on speculative lease-up in their projections. Most investors I deal with want to place substantial (35 to 40 percent) equity into properties they are purchasing.
• The activity in 2006 and 2007 felt like a bubble. This does not feel like a bubble. The increase in the investment sector is driven by the inability of investors to obtain a return elsewhere combined with distrust in the stock market and a desire to hold tangible assets.  These drivers are likely to continue for the foreseeable future.
• Omaha and similar Midwestern markets will continue to attract outside investors because we offer higher returns, stable economies and business friendly environments.