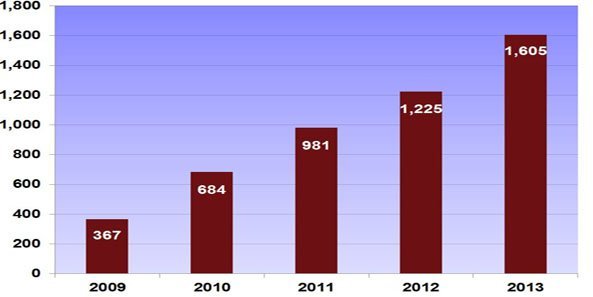 While Omaha’s commercial real estate market is improving, the multifamily sector is leading the charge.  In 2013, we saw two suburban ten acre parcels, that were planned for office, rezoned into multifamily sites.  Shells of vacant downtown office buildings continue to be refurbished into stylish apartments.  We are currently seeing four significant ground-up projects in various stages of construction in the downtown area.

The Omaha Metropolitan area construction is beginning to catch up with demand. In 2013, we hit 1,605 units permitted, see chart.    In addition, we are counting roughly 2,000 units under construction and another 5,000 more units in the planning phase due to come on line in 2015 and 2016.  If the Omaha Metro area constructs 1,500 units per year until year 2020 and we absorb an average of 1,000 units per year, our occupancy rate should fall back to its historical average of 93% occupied.

Elevate Living Doubles Down on Omaha.

In 2006, Elevate Living, from Minnesota, purchased the Old Market Lofts.  Near the end of 2013, Elevate Living closed on Camelot Village, Montclair Place, and Westwood apartments and duplexes.  These properties were previously owned by a branch of the Seldin group.  In total, more than 700 units were purchased by Elevate Living for a total of about $35,000,000.  See other side of postcard for more information.

Despite a low amount of properties on the market, transaction volume remained strong.  In both 2012 and 2013, we saw over $100 million in sales.  The four largest transactions in 2013 (Whispering Ridge, Parkwest, Villages at Camelot and Westwood) were all purchased by out of state buyers. Looking ahead, with very low cap rates and buyers having access to inexpensive capital, it is a very good time to sell; however, with increased rents and high occupancy, it is also a good time for owners to hold.  This conundrum keeps the inventory of available apartment complexes in short supply, creating a difficult environment for an owner of a smaller property to have the ability to exchange into a larger property.