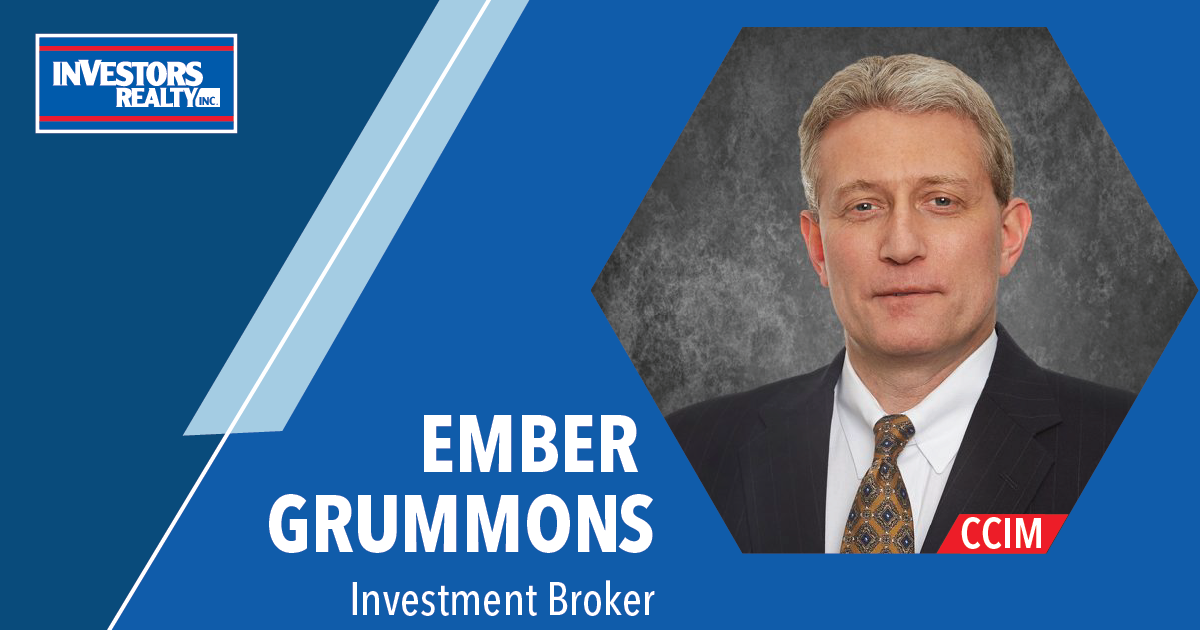 An offer to relocate by Union Pacific Railroad in 1990 is what first landed Rochester, New York native Ember Grummons in Omaha. Ember had been working in Atlanta – a city he loved – and U.P. had promised him he could move back there after a couple of years of training in Omaha. However, six months into that training, U.P.’s Atlanta office was shut down and Ember found himself “stranded” in Omaha.

Fast forward nearly 30 years and Ember’s career in real estate investment in Omaha is the envy of many. This year, Ember celebrates 21 years at Investors Realty. But his first love was trains, and his first career with the railroad led to his second in real estate.

In the early 90’s Ember was enjoying his new position within the railroad in marketing and sales. However, after about four years he started growing restless and realized working for a large corporation would not be a fit for him. He had a feeling there was something more fulfilling he could be doing.

Ember’s wife Elena introduced him to Dave Underwood, owner of the Real Estate Brokerage Company, who offered to take him on as a broker. At that time, Ember knew nothing about real estate, but for some reason he felt pulled towards it. He decided to take a risk and jump in.

After a year with the Real Estate Brokerage Company, he got an offer from LeGrande “Mac” McGregor and went to work for him. Ember’s job was to lease vacancies and sell buildings from Mac’s portfolio. It was under Mac that he learned about investment sales and Ember loved working for him. However, Ember was good enough at his job that he soon sold off a lot of their portfolio, leaving little left to lease. Ember also missed being around more people. He knew it was time for another change.

In March 1999, Ember received an offer to move to Investors Realty.

“I knew if he had been trained by Mac McGregor that he was going to be good,” said R.J. Neary, Investors Realty president.

As he joined the firm, Ember was still drawn to investment sales. He knew he could make the same amount of money by closing three or four sales a year vs. negotiating 30 leases. However, investment real estate has a long sales cycle. It takes years of work to even get a career off the ground. After a frustrating few years trying to pursue both leasing and investment sales, Ember decided to “take the plunge” and spend 100% of his time on investment sales. In time, his risk paid off and today it is what he’s become known for in the industry.

“I love what I do,” Ember said. “I love the niche I have created for myself, the clients and the types of projects I get to work on.”

Ember and his colleagues agree that the niche suits Ember’s personality as someone who is very focused and detail oriented.

“When I come to the office in the morning, I have a plan for the day. I know what I need to do and in what priority. I work with people in different time zones, so I plan around that. I do the highest and best task first,” he said.

Ember participated in coaching sessions through the Strategic Coach program based in Chicago for over 13 years. Through the program he learned to refine his work and ensure that he is doing business with people and clients he likes and doing work he loves for as many minutes of the day as he possibly can.

“I’m lucky to be at a point now where I have more projects than time most of the time. I would rather work on a few substantial, meaningful projects than a large number of projects that are not as interesting to me,” he said.

Ember points to a few clients who check those boxes and who have impacted his career including KVI, Lockwood Development, NewStreet Properties, and Jasper Stone Partners.

“These clients are all very fair to deal with and what I love about them is that they make rational decisions,” he said. “Of course, they also want the best set of terms and conditions like any client would. But I have always respected the way they deal with things.”

While what he does is so specialized that he is often working on projects alone, some of his clients are working with multiple brokers and team members at IRI, meaning they are clients of the firm, not just Ember’s. The service and results everyone provides to them is what keeps these clients coming back.

Outside of work, Ember spends time with his wife and his three children. He takes pride in ensuring he made it to his children’s recitals and baseball games over the years despite his hectic schedule. He loves to travel, especially to places like Colorado where he can ride vintage steam engines in remote mountain scenery. He also loves classic rock music and will often travel to see concerts by his favorite artists.

When you walk into Ember’s office at IRI’s new space, you will see photos of the trains that first brought him to Omaha and, ultimately, to IRI. He may mention having several substantial investment projects in the queue at the moment “but they may or may not happen.” Such is the nature of investment real estate at any point in a career.

“Ember wants to be the best at everything. He researches, he calculates, and he makes sure he’s making the best possible decision,” RJ said. “And that actually includes those darn speakers. He researched those for months,” he said, laughing.

R.J. points to the top-of-the-line speakers Ember uses in his office to keep his energy up, sometimes politely shutting the door so he can play his music more loudly.

What keeps Ember coming into the office every day is the positive culture at Investors Realty.

“There’s a great camaraderie here among the entire team and there are no politics here. Our leadership is very fair with people. No one tries harder to be good at what they do than the people at Investors Realty. We just have a focus on it,” he said.

Congratulations, Ember, on 21 years at Investors Realty! We can’t imagine IRI without you and all of the ways you keep the IRI engine running.