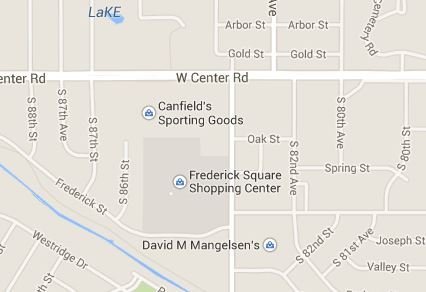 Note: Investors Realty Inc. leased and managed Canfield Plaza for the Canfield Family over multiple generations and is pleased and excited that their legacy lives on in this thriving area of Omaha.

By Barbara Soderlin / The Omaha World-Herald

For the first time since he started working at Canfield’s in 1993, Scott Marble said, there’s not an empty storefront around.

Canfield Plaza not only is full, but its new owner also may develop two new sites in its parking lot to accommodate more tenants.

It’s one of many signs of life in the business district around 84th Street and West Center Road, an area first developed more than 50 years ago that brokers say is now seeing new investment thanks to its location and an overall increase in leasing activity in Omaha in the past year.

If it weren’t squeezed between Interstate 80 and the upscale neighborhoods surrounding Westside High School and the Happy Hollow Country Club, the area might have been passed by as shopping center developments in more recent decades moved west and were concentrated in larger “power centers.”

In La Vista, they point out, 84th Street is a different story: a blighted commercial zone. Citizens there in May voted to increase their sales tax to develop new civic, commercial and residential uses for the corridor. Mayor Doug Kindig said free enterprise was not enough to revitalize the area after anchor stores Walmart and Hobby Lobby relocated.

But to the north, property owners are investing, and brokers say the land will become more efficient and valuable as new restaurants and retail buildings take shape in vast parking lots off the I-80 exit.

“Everyone thinks that 84th Street is a sleepy corridor — it’s not,” said Trenton Magid, whose World Group Commercial Real Estate is now managing Canfield Plaza, the commercial cluster anchored by Canfield’s and Westlake Ace Hardware at the southwest corner of 84th and West Center.

Local investment group Schumacher Enterprises recently purchased the property for $10.2 million, about $55 per square foot, close to the current median sale price for retail property in the metro area, according to LoopNet.

Magid said the new owner wants to keep the current tenants, possibly raising rents as tenants turn over, but sees “a lot of upside potential,” to make the property more valuable with up to two new buildings on parking lot, or pad, sites.

The same thing is happening at the two other shopping centers in the district. South of Canfield Plaza, at Shopko-anchored Frederick Square, workers will break ground this spring on a 6,000-square-foot outlot building. Jimmy Johns will be a tenant, said Magid, whose firm handles leasing there.

“We see that there’s more demand,” he said, “and that’s why we are marketing the pad sites and building more retail there. It’s full-up.”

And to the southeast, at Westgate Plaza, home to craft store Mangelsen’s and Hancock Fabrics, the owners plan two new pad sites: one at 84th and Hascall and one at 84th and Grover. Randy Wieseler, president at First Management, which manages the plaza, said there is more parking than necessary there because the property used to be home to a grocery store.

On the southern end of Westgate, Wieseler is now marketing about 17,000 square feet of vacant retail space, after the property owner invested in improvements to the parking lot to bring it level with the retail entrances. Wieseler expects to be able to charge higher rents as a result, saying, “Now we have an opportunity to do better.”

“There will be some nice changes up and down that stretch,” Wieseler said.

One property that doesn’t hide its 1960s architecture isn’t going anywhere. The Tangier Shrine Center, built in 1962 by the Caniglia family as the Palazzo ’Taliano West restaurant, has no plans to move, said board member Don Larson.

The Cinema Center movie theater, dating to 1967, had a market value of $4.4 million in 2008 when Southport West Partners, in which Hokanson is an owner, acquired it as part of a land exchange also involving the Southport West development in La Vista. The theater has been vacant since 2009, and is listed at $2.9 million, but Hokanson said he’s in talks with a potential buyer.

A group called the Omaha Gun Club wants to use it as a recreational shooting range. A website for the project calls it “an elite 5-star, firearm practice facility” with a focus on education and safety. The City Planning Board approved a conditional use permit in September.

Retail tenants in the area say they are committed to the location. Marble last year bought Canfield’s, where he had been an employee, and is investing in improving the interior of the store that sells camping equipment and sporting goods. He created a new logo, one he said looks less like the logo for competitor Cabela’s, and this week is installing a new sign.

Tandy Leather returned to Canfield Plaza in 2013 after years in northwest Omaha, where customer traffic was not as good, manager Jerry Kritenbrink said.

Now, old customers have returned, and with a United States Postal Service office next door, Kritenbrink said, “A lot of times we get walk-by people who didn’t know we were here.”

To David M. Mangelsen, whose parents in 1961 opened the store that became Mangelsen’s, the area today is looking good.

“It’s always ebbed and flowed,” he said. “Businesses come and go. Some have staying power.”

For his business, which tried and later closed a west Omaha spot, “There is no other location.”