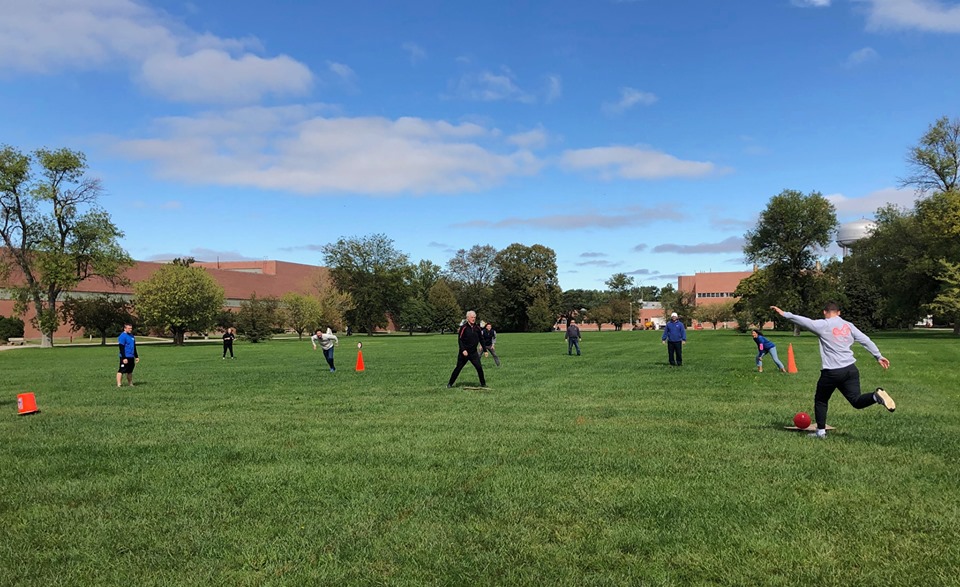 In August of 2019, Jerry Huber sent an email about wanting to play in a sports competition this summer.  As luck would have it, a few Investors Realty, Inc. employees already had a plan in the works. This plan matured into an actual event over the lunch hour on Thursday, October 3, 2019 in the shared courtyard of the Omaha Works Business Park.

The wet and cool conditions were not exactly welcoming and when Jennifer DeCock, one of the events primary organizers, announced she was unavailable for the game, Nicole Morrison, co-organizer, former Central High School soccer standout, and mother of three stepped up to manage all the variables to make the game happen.

While the rules of drafting were slightly ambiguous, teams were drafted and produced the following lineups:

After Maggie Andrews singled to start the game, Julie Messer made a statement catch on a deep fly ball to left. Seeing Julie make this great play forced team Grateful to rethink their power kicking strategy and followed up by spraying singles off RJ Neary to all parts of the field. These kicks were complimented by great baserunning as they kicked through their entire order, scoring six runs in the first inning.

In the bottom of the inning, pitcher Andy Steingas give up a few small kicks, including a heady bunt from Property Management Director Laura Hansen, who took advantage of the fact that Team Grateful decided to not place a fielder at the catcher position. On the following kick from Jerry Huber, there was a close play at second where Laura was called safe. The call most certainly would have been overturned by a replay if it had been available, or if Laura were less kind of a human being who didn’t REALLY WANT to be safe. This close play also left COO Tim Langan with grass stains on his cream colored, high end, golf sweater.

Andy was set to wiggle out of the inning with limited damage as he got two kickers, in-a-row, to kick lazy fly balls to center. However, standing out in centerfield was Mike Rensch, who had yet to remove his perfectly-fit-for-business-meetings, but probably-not-so-good-fitting-for-kickball sportscoat. Mike took both balls right off his chest allowing Team Accountable to also kick through their order and put up six runs of their own in the first.

In the top of the second, Team Accountable decided to replace struggling pitcher, R.J. Neary, with Chris Workman. With a strong defense behind him, Chris held Team Grateful to a scoreless inning. Their defense was highlighted by another great catch from Julie in left and a strong catch from John Faur, despite his fairly hefty collision with Sara Hendricks as he was making the catch.

In the bottom of the second, new pitcher, Tim Langan, benefited from many defensive positioning adjustments and fewer dropped balls by the Team Grateful defense. Nicole Morrison made a Julie Messer-like catch on a hard fly ball to right center, but without a doubt, the play of the inning goes to Maggie Andrews who ran down a big fly ball in right. If it were an NFL game ten years ago, Maggie absolutely would have been flagged for excessive celebration after making her catch, but it’s kickball so it was just brilliant to watch and key to holding Team Accountable scoreless in the inning.

In the top of the third, two early outs were followed by a single from Andy Steingas. On the next kick from Jeanette Weber, Andy was extremely aggressive on the base pads scoring the go-ahead run all the way from first.

In the bottom of the final inning, Dan Morrison was selected to be the closer. He wiggled his way into a two on, two out situation as big left footed Chris Workman walked to the plate. After a foul ball, Chris blasted a rocket to the gap in left center. Julie hoped to tie the game as she was waved home by third base coach R.J. Neary. In the outfield, the ball was run down and with a quick and accurate throw to the cutoff man, Dan Morrison, who turned and threw it to Jeanette Weber where she tagged out Julie Messer at the plate ending the game in the most exciting play that this annual kickball game might ever see!

Thanks to everyone who played and special thanks to the organizers that deserve the majority of the credit for making the game happen! Jenny DeCock, Nicole Morrison, Bobbie LeRette & Jack Warren! Additional thanks to event photographer Krissy Harral and all those who came to watch!