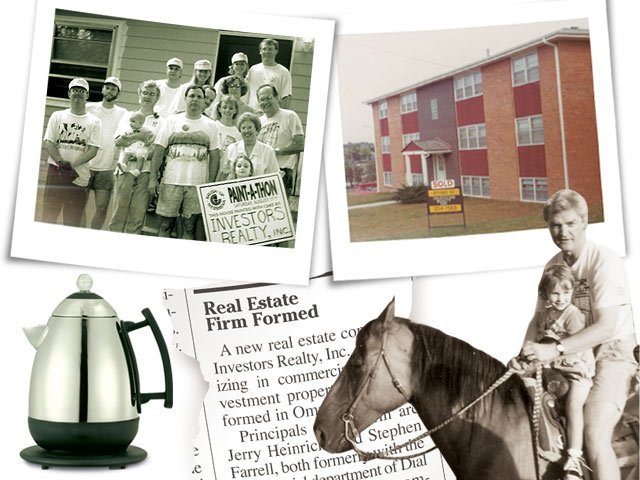 May/June 1975
Investors Realty was created by Jerry Heinrichs and Steve Farrell – the idea started over drinks! Their first lease was written on a napkin and their first office purchase was a coffee pot. First office opened at 115th & Davenport with three brokers and one secretary. Original Goals: Create local small investment partnerships, increase net worth and have fun! Culture: Always put the client first and the money will follow. No titles were given. Continuous education was a must.

1976
Hired Chris Sailors as the secretary, bookkeeper and receptionist. Chris just retired in 2012.

1998
Jerry returned to Investors Realty as a broker.

2000
We celebrated our 25-year anniversary. The firm became full service including: brokerage, brokerage assistants, property managers, maintenance and accounting. A consultant helped Investors Realty become more sector-specific and improve property marketing packages. Steve Forbes moved from working as a broker in the 90s and later a business development and project coordinator to advancing the company in IT, marketing and reporting.

Mid 2000s
New positions for IT, marketing and management were created as Investors grew and gained a broader clientele.

2010
Steve Farrell stepped down as President, replaced by R.J. Neary. (Titles still do not affect how teams interact and are just for corporation status.)Tim Kerrigan named as Vice President.

This article appeared in our quarterly newsletter from June of 2015. The full newsletter is available at http://files.investorsomaha.com/download/online_newsletter_6-2015.pdf